Request An Appointment
Go Back

Insight into causes, types and treatment of aphasia 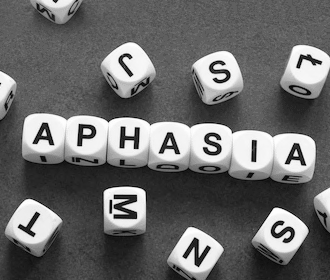 Most people who are familiar with the term associate it with stroke (i.e., brain damage caused by disrupted blood flow to the brain). But aphasia, an impairment of language, is not always caused by stroke. Really, a variety of brain conditions, including neurodegenerative diseases (brain disorders that worsen over time), can cause aphasia.

Aphasia affects more than 2 million Americans, according to the National Aphasia Association. It is an acquired language disorder brought on by specific damage to the left half of the brain, or as Testa says simply, “a disruption in communication.”

Aphasia may affect a single form of communication-;be it the ability to put together complete sentences, find the right words, or read and write-;but most commonly impairs multiple language uses simultaneously. The condition is most common among middle-aged and older people, but it is possible for younger people to acquire it. Language impairments can range from mild to very severe, depending on which areas of the brain are affected.

View the original article on News-Medical.Net.